Why Is Pisces The Last Sign In The Zodiac? Not the first 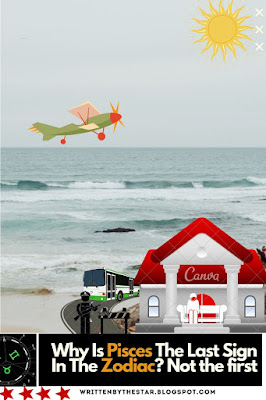 Everything from the colorful characteristics of each of the astrological seasons, to the cyclical patterns of mother nature, intertwine with one another, and in turn, reflect onto our lives. After all, those who believe in astrology are well aware that the positioning of each celestial body can ultimately influence us here on Earth.


For instance, the zodiac cycle kicks off with Aries, --->>

which also happens to be the first day of spring, right? Well, it's no wonder we use the term "springing forward," given that Aries is ruled by red-hot Mars, and we are instantly gifted with a surge of energy as soon as this season arrives. I'll give you another example, holidays such as Thanksgiving, Christmas, and Hanukkah take place during Sagittarius season, and this isn't a coincidence either. Jupiter is Sagittarius' planetary ruler, as it is the planet of faith and hope, which is exactly what the holidays are all about.

See what I mean? There's nothing serendipitous about astrology, nor the divine timing of the seasons. Now, I typically refer to the cosmos as plural, even though it's technically "singular," considering the fact that it is the universe, and all that is, but in the end, it's all a mystery. However, one thing's for sure, and it's that there is something much much greater watching over us all. It's something massive and unexplainable, but in typical Pisces nature, we have to remember one thing: Just because we can't see it, doesn't mean it isn't there.

WHY IS PISCES THE LAST SIGN IN THE ZODIAC?

In astrology, Neptune is the planet of dreams, illusions, compassion, spirituality, and art. Naturally, this elusive entity is Pisces' planetary ruler. However, the energy of Pisces is much more than a magical fairytale, and seeing the world through rose-colored glasses. See, there's something truly otherworldly about this energy, and it's not always fantasy related. Pisces is also a symbol of selflessness and sacrifice, as it is a reminder that all you need is love.

It's no wonder this mutable water sign rules the feed, as it is a representation of our spiritual path, and return to the divine. Does that answer your question, stargazers? Truth is, the symbol of Pisces is the two fish swimming opposite ways, but it's also a representation of its infinite duality. One fish represents our spiritual evolution, as it reaches another dimension, while the other is a symbol of our human experience in the physical dimension.

Pisces might be the last sign in the zodiac, but that doesn't make it any less significant. On the contrary, Pisces is both God and humanity, and reaching this state of consciousness can only occur once we've reached the last and final phase of our spiritual evolution. This is Pisces.

NATAL READING: Can You tell me If there is something positive in my chart?

The Significant of Nocturnal type of chart in Natal chart Reading

Whether you are a teenager or in your mid 40s, the focus is currently on your relationships and finances. Read more..

Popular posts from this blog

This is often a year of tremendous change .  It is common for individuals with an 8th house Sun to change their lifestyle completely during this year.  The emphasis is on radical change.    Usually, there is at least one major change during the year accompanied by many minor changes. Mental stress can result  .
Read more

Special Astrological alert for this Month Ahead of October 2022

Astrology can help you discover pretty much anything you can imagine, including  how to find  Your most luckiest day for This Month 2022 TRANSITING SATURN SQUARE TRANSITING URANUS (10th House to 12th House) In Orb Oct 18 2022, Already Oct 18 2022, Leaving Oct 23 2022 This can be a time of great tension. You experience less of the tension if you have built your life on a firm foundation with a healthy balance between responsibility and the need for freedom and change. However, if you have allowed your life to become stuck in tired, rigid routines, this period can be very upsetting. Any area of your life that has become stuck in a rut is open to challenge and you will find it best to face the challenge of changing old patterns and embrace new and exciting plans. TRANSITING JUPITER ENTERING PISCES (11th House) Oct 28 2022 You are on an intuitive search for the truth. You are a champion of the underdog. You could be a spiritual or religious teacher. TRANSITING MARS SQUARE TRANSITING NEPTU
Post a Comment
Read more

The SUN in 5th House in SOLAR RETURN CHART Interpretation

In order to fully understand the cycle of the Sun in the solar return houses, it will be necessary to follow the Sun's yearly path, which is clockwise, and usually moves through three houses. For example,   the Sun in the  1st house  in this year's solar return will probably move up to the  10th house  next year,  assuming certain conditions:
Read more

The SUN in 4th House in SOLAR RETURN CHART interpretation

The Sun in the 4th house Solar return chart indicates that the individual is looking for a physical, emotional, and spiritual home:  The one place in the Universe that becomes a special niche on all levels.
Post a Comment
Read more

The SUN in 10TH House of yearly Solar Return chart

The SUN in 11TH House of yearly Solar Return Chart

The  11th house  of the solar return chart is the house of "Why not?"  and those with the Sun in this placement question everything.  While the 10th house is the house of laws and traditions
Read more

The SUN in 6th House of SOLAR RETURN CHART

The SUN in 9th House in yearly Solar Return Chart

The SUN IN 7TH HOUSE Of Solar Return Chart Astrology