The SUN in 9th House in yearly Solar Return Chart 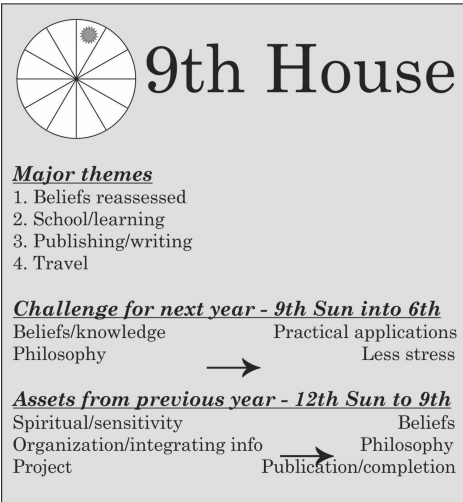 The 9th house is the house of beliefs.

In many astrology books, this is the house of spiritual and religious information, but it actually rules much more than that.
It includes any belief or misconception that guides or misguides one's life. Prejudice, religious intolerance, chauvinism, and all other ingrained, stubborn beliefs that control your life are seen in the 9th house of Solar return chart..
When the Sun is in the 9th house, many “higher” and "not so high" beliefs need to be tested and worked with.
Generally, there is at least one major misconception recognized during the year. But it is also possible to realize the fulfillment of a strong belief in your own abilities. also read, Example Case Study chart - Sun in the 9th house of Solar return chart.
-
The beliefs which pass the test of the 9th house go on to be applied while the Sun is in the 6th house..

For example, a belief in the rights of animals might lead to a dietary change to vegetarianism: or a meditation practice established while the Sun is in the 12th house, might lead to an understanding of "anicca" (the Buddhist concept that everything is changing, nothing stays the same).

Many philosoph-ical perspectives, acquired while the Sun is in the 9th, can help alleviate stress when the Sun moves onto the 6th house.
-
The Sun in the 9th house of Solar return, can also indicate ex-tensive traveling. You are more likely to travel outside the country and overseas, especially if there are other 9th house placements. Experiencing other cultures should make you more tolerant of others and their belief systems.

When Neptune is also in 9th House of Solar return chart, this is a good time to study religion, philosophy, or holistic concepts. This field of study can be particularly helpful. Learn more..
SOLAR RETURN CHART BASIC : from first house to 12 house

SOLAR RETURN CHART: The Moon as an Emotional Indicator

The Moon's sign can be important even though the Moon has essentially only nineteen placements, because it is indicative of what the individual feels during the year and how he or she is most likely to exhibit those feelings.
-
For example, a solar return Moon in Cancer, interpreted by itself and out of context, implies that the individual tends to be more emotional during the year. Learn More..

PLUTO IN THE 9TH HOUSE of your yearly Horoscope

An intense learning period can occur while Pluto is in the 9th house of Solar Return chart, and this is regardless of whether or not you are actually in school. Generally, it is not the academic environment which is most notable. Learn More ...

NEPTUNE IN THE 9TH HOUSE of your Yearly Horoscope

The danger with this placement is a tendency to be misguided. Because there is a movement from external standards (religion) to an internal realization (enlightenment), confusion and uncertainty may accompany the transition. Learn More...
-

MOON IN THE 9TH HOUSE of your Yearly Horoscope

Because the Moon is in the 9th house of solar return chart, what you give and get out of relationships will be very important. Read more...

MERCURY IN THE 9TH HOUSE  of your yearly Horoscope

If you are involved  a difficult situation, and you have any planets in the 9th house of your solar return chart, you may have misconceptions that are contributing to your problems or complicating the issues. Read More...
-

VENUS IN THE 9TH HOUSE of your yearly Horoscope

It seems strange that Venus in the 9th house of solar return chart might be associated with relationship difficulties, but this is often the case. Read more..

MARS IN THE 9TH HOUSE of your yearly Horoscope

This year you will identify strongly with your religious, philosophical, and ethical beliefs, and this is a good time to pursue further investigations in these areas.  Read more..

JUPITER IN THE 9TH HOUSE of your yearly Horoscope

There is a strong emphasis on spirituality with this Jupiter in 9th House of Solar return placement. Read More..

SATURN IN THE 9TH HOUSE of your yearly Horoscope

Saturn in the 9th house is associated with learning in one form or another. Commonly it can signify a formal education in an established university or college, Read more..
[email protected]
Your Future According to What is Written in Your Star . No More no Less no Marketing Strategy, Just Telling What is written in the Star. EMAIL ME: [email protected]

By [email protected]
Zodiac Manipulation 3rd topic “communication”: You and people of your third sign    Thereby it is a matter of one of the following connections:   We are moving forward in the circle of the zodiac signs and will have a look at the third sign now. Communication is everything in life. Consciously or unconsciously, we are in constant exchange with our fellow human beings, verbally as well as non-verbally. Through communication, we create our environment: work place, friendships and partnerships.
Read more

The Psychic ability within us Base on Zodiac

By [email protected]
Some like the Aries are notorious for being at the right place, right time, while others like Libra seem to know people better than they know their own selves. Freaky!
Read more

The Manipulative power of PISCES over the Other Zodiac sign

By [email protected]
Pisces stand for the deep, unfathomable and mysterious.  They are very sensitive, both in terms of their own suffering as well as with respect to the suffering of others. Their desire is to go with the flow and avoid all obstacles. They are true masters of unconscious manipulation. This is namely their innate ability, which they use very often and often cannot help it. Their house is the 12th house of the psyche and this is about everything that cannot be seen with the naked eye, what we only feel, guess and suspect.
Read more

SCORPIO, Read This Before you invest your emotions in love relationship

By [email protected]
Before you invest your emotions in love relationship, Scorpio, be sure it's right for you. The type of mate you need to feel truly fulfilled will be warm, physical and sexually appealing, but totally loyal to you. Seek out someone who is turned on by fervent glances, intense feeling and karmic ties.
Read more

By [email protected]
January 21 to February 19  How People May Behave During Solar Month of Aquarius Season A generally innovative month, Aquarius is the time when we need to access the bigger picture. People will feel strongly about their ideas and may even get a bit aggressive about them. People may also be a bit stubborn and insensitive toward others in the face of implementing their ideals.
Read more

This is How to Keep the ♐ SAGITTARIUS you Love

By [email protected]
HOW TO KEEP THE SAGITARIUS YOU LOVE  • Role-play as if it’s for real.  • Believe them when they tell you about their godly past lives.  • Do something for them every once in a while because they “shouldn’t have to.”
Read more

Your Past, Preset and Future is Written in the star, is there anything to be learned from it?

By [email protected]
Sometimes we looks into the history of astrology and asks if  STAR SIGN can teach us anything about our relationships. What is astrology? Diagnosing Incompatibility The Birth Chart People often turn to astrology in a bid to gain greater insight and a deeper understanding of themselves, their friends, family and romantic partners. While scientific testing has found no evidence to support astrology, and many remain extremely sceptical, you only have to look at some of the astrology influencers on TikTok to know that others appear to live their life by their signs. So, what exactly is astrology and is there anything to be learned from it? ... If you Asking if your Future is Written in the star, I tell you letterally,  Here are my Explaination using Astronomy or outside of the scope of Astrology. For Example Case Study
Read more